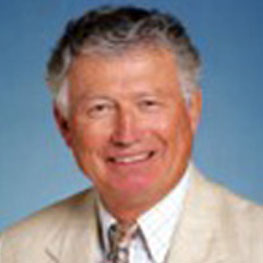 Hunter divides his time between Incline Village, Nevada, and Rancho Mirage, California. Hunter has been a Society members since 1963 – second only to Bill Broadbent who became a member in 1962.

Hunter went to work at his father’s real estate firm in 1960, and he started his own firm in 1962. In 1963, a real estate/social friend had taken Richard Reno’s course “Modern Real Estate Exchanging” and wanted to join S.E.C. but needed an S.E.C. broker. The friend, (Bill Weil, known years ago as the ‘Peppermint Kid’ by S.E.C.’s), loaned Hunter the money to travel to Dallas and take the Reno course and be his S.E.C. broker. Richard Reno’s class was the most significant turning point in his life. Hunter came home from Dallas and fired all his salesmen, got rid of three new home subdivisions listings that weren’t producing, and made more income doing exchanging in six months than he had in the previous three years.

He became an S.E.C. in 1963, claiming to be yet the youngest member to be inducted at age twenty-seven. He was the first regional director, named by edict of Richard Reno (“to prevent political rivals”). Hunter considers being named Counselor of the Year of the S.E.C. in 1984, the highest and best moment of a career filled with many high points. He served as President in 1988.

Hunter, along with Cliff Weaver designed and taught the first exchange counseling course in the late ‘60’s, “Exchange Counseling” to inform those who said “What do you mean by ‘a counseled client?’” It was a one day course including numerous forms, formulae, a counseling demo, case studies and lunch for thirty-five dollars. Madge Davis, S.E.C. sponsored their second successful course in Southern California, audited by Evelyn and Dick Reno as guests. Hunter admits that he and Cliff were at first simply trying to recruit brokers to do deals with. Cliff Weaver and Hunter did produce a manuscript for a book outlining the course which was given to the S.E.C. long ago.

Hunter Quistgard’s overall philosophy is: BE A BUYER, “understand the economics of real estate;” keep an inventory of each vehicle’s ‘benefits’ in your head as they will be handy when the needs and objectives of each client shows forth and transaction creating processes, like “Stone Soup” are in progress.

Hunter has been a colorful and valuable addition to the Society for almost 50 years.